File this one under Things You Don’t Find During Traditional Demolition- bear with me:

This machine, made by Bradley & Craven, forced slugs of clay into molds. (Image courtesy of fotolibra.com)

The machines performed many of the duties once assigned to workers: rather than being hand-molded one or several at a time, machines could produce ribbons of clay that were then cut into dozens of bricks with a quick swoop of a mechanical arm. Other machines pressed clay neatly into molds and sent them along a conveyor belt towards drying racks.

Though machines could perform the work of several men, humans were often still required to move the brick from one step in the brickmaking process to the next. (Image courtesy of flickr.com)

While the relentless pursuit of efficiency and profit resulted in the mechanization of much of the work formerly done by humans, it by no means obviated the need for workers in the brickmaking industry. Around the turn of the century, brickmaking operations often relied on humans to move bricks along from one step in the process to the next; though bricks could be machine-molded or cut, workers often handled the bricks as they were sent to drying sheds and, ultimately, the kiln.

We see evidence of this all over the place in East Baltimore. Every so often, we come across a brick with clear fingerprints impressed upon the surface. It’s highly unlikely that our bricks were fully hand-molded when they were made during the first decade of the 20th century, but it’s certain that they were shepherded along the process by several sets of human hands. Our best guess is that the fingerprints landed on our bricks after they were molded but before they’d been fully dried, when a worker lugged them to a drying shed. 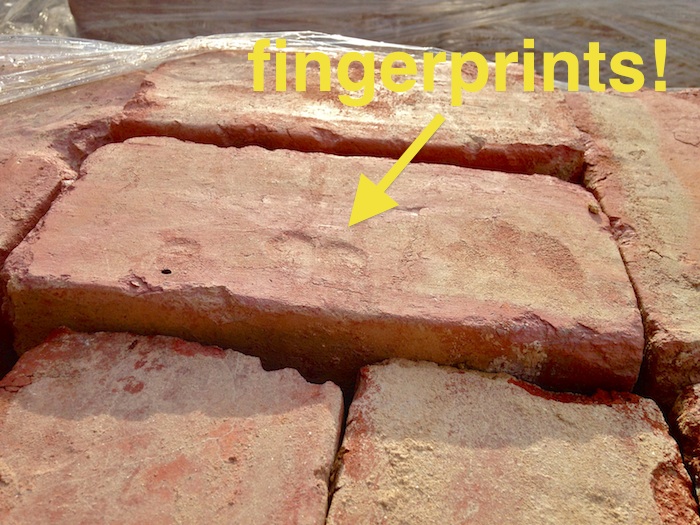 The giants of modern brick production rely on an almost human-less process, with robots and highly specialized machines guiding the brick along a fully automated sequence. There are machines that stamp textures into the surface of the brick, and other machines that spray on layers of dye to give bricks a “historic look”. 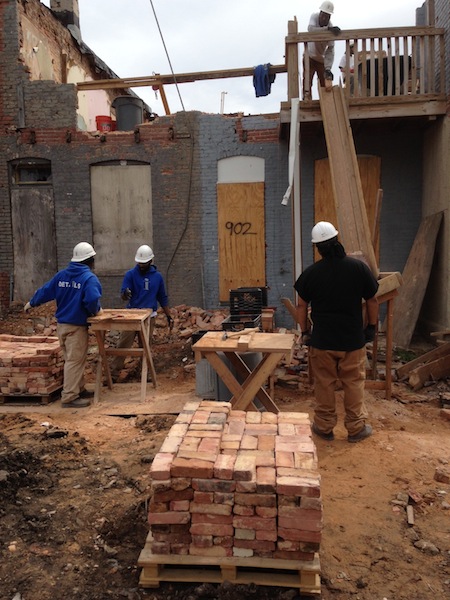