In 1910, 2428 Eager Place was rented by Enrico Schiodi, a 28 yr old Italian tailor who lived with his wife Anna and his young daughters Rosina and Annie. With them lived another Italian family composed of Vincenzo Trimigliozzi, a 27 yr old shoemaker, his wife Ossunda and their infant son, Frank.

By 1920, some of the residents of 2428 Eager Place remained, but their names had changed. Enrico Schiodi, who now owned the house, became Enrico Chiord (at least as listed in the census- it’s likely the name was actually Chiodi). Anna, who had listed her name in the 1910 Census as “Anna M”, was now called Mary, which was probably her middle name. Rosina was now Rosa, and Annie stuck with Annie. The newest addition to the Chiodi family was named Willie. Enrico was still working as a tailor.

In 1924, there were four Chiodis listed in the City’s business directory and they were all tailors

The last record we could find for Mr. Trimigliozzi is his draft registration card from 1918. It seems he left Baltimore at some point after 1910 and moved to Essex, NJ where he worked making uniforms.

The Chiodi family was still living at 2428 Eager Street when the 1930 census was taken. Enrico was 49 now, and his house that he’d bought for somewhere around $800 was now worth $3600, making it one of the most valuable on the block. Rosa was now Rose, and she worked as a bookkeeper for a contractor. Little Willie was now an apprentice machinist, though he was out of work at the time the census was taken. And Annie? Ms. Annie Chiodi was doing quite well for herself at the Maryland State Normal School (what we now know as Towson) where she played hockey and volleyball! Our exhaustive research tells us she was also the only person on her yearbook page to actually smile. 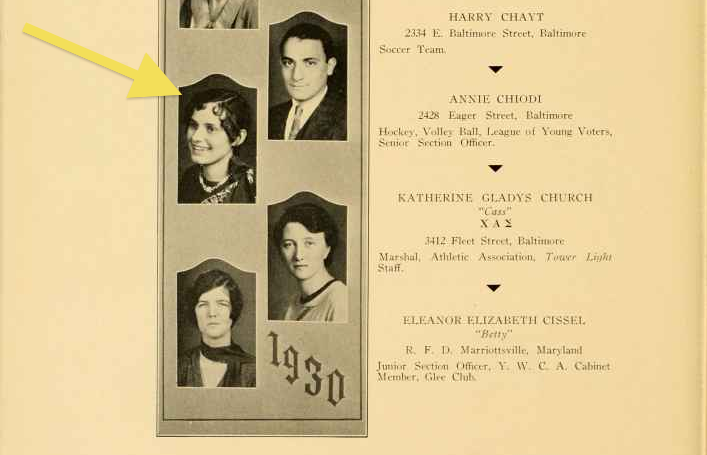 By 1935, the Chiodi family no longer lived at 2428 Eager Street. The only record we could find was for Willie, who had moved into a brand new house at 2703 Bauernwood Drive in the suburb of Parkville. 2428 Eager Street was now occupied by the Alt Family, composed of Charles, a machinist, his wife, Elizabeth and their their three children. 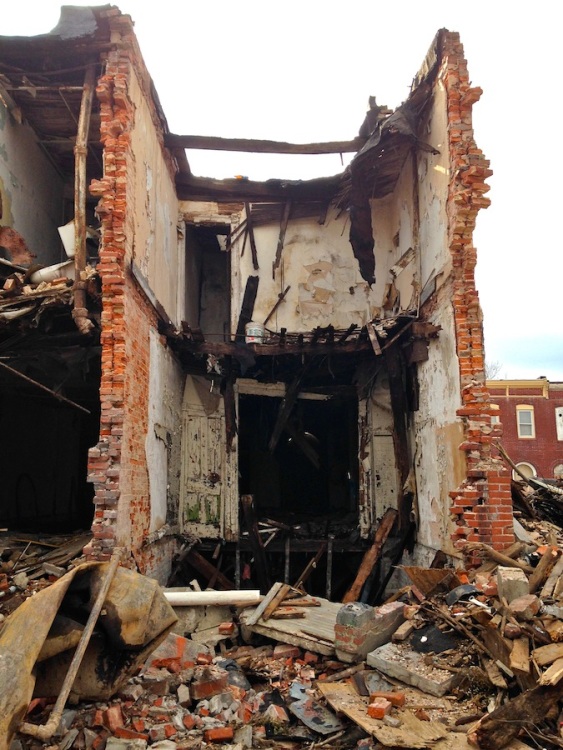 The rear of 2428. We picked away the brick from the back wall. eventually exposing the rotted guts of the house.

An interesting P.S. about this story from the You Can’t Make This Stuff Up File: a huge part of deconstruction involves processing the materials that we harvest from houses, and the bulk of processing involves denailing beautiful old wood. The name “Schiodi” struck us as a particularly interesting name, so we dug into the origin a bit: turns out “Schiodi” is the present subjunctive conjugation of “schiodare” which means, I kid you not, “to remove the nails from, to unnail.”

One thought on “Ghosts of Eager Street: Pt. V”